What in the universe could these things possibly have in common with one another?

Nothing at all. They have absolutely nothing to do with each other except for the fact that they’re all part of our life with our BFFs, Greg & Tiffany.

When my husband Todd and I began attending our church, it was like a breath of fresh air. The faith-space we’d been in prior to that felt stuffy and restrictive, and Jesus is anything but. So we knew when we found a fellowship of folks interested in authenticity, we’d found a home. We spent our first year taking every class available and tried to really sink into the community.

Little did we know, while we had been busy diving into classes and studying and getting the lay of the land, a couple of folks had their eyes on us. Greg and Tiffany had been at the church for a while and had settled in, but were looking for a friend-couple to hang with. Up until that point they hadn’t found one couple that they both seemed to click with.

Somehow we popped up on their radar, and they began stalking us. (In a friendly, not-very-creepy-at-all sort of way.) That’s actually how it happened. They basically became our little secret fan club and talked to each about how they thought we might be The Ones. They seem pretty cool. They’re really plugging in here at church. They seem to be about our age. They’re kind of funny. I think we all might get along.

Greg & Tiffany are a couple of bikers. They found Jesus in a super unconventional way, and I love every second of their story. None of us can seem to remember our first date together, but we know it didn’t take long before we were hooked on each other as friends. We knew we were each other’s People. We joke about what a weird mix we are. Two bikers, partnered up with an elementary school teacher and a hard-workin’, ex-Navy man. They’re black leather and tattoos. We’re jeans and flip flops. (And just a couple tattoos.) They shop at Wal-mart. We refuse. They would have 3,487 pets if you let them. We don’t even have one.

But all that stuff is just stuff. It’s fun to notice but it’s not what makes someone Your People.

Everything that made Greg & Tiff Our People happened without any effort. Every time we were together we laughed so hard. We intuitively knew that we could talk to them about anything. We all had a lot to be thankful for, including lives that really painted a picture of what it meant to be new creations (2 Corinthians 5:17.)

Hang-outs with Greg & Tiff turned into more regular get-togethers. We realized our personalities are opposite: Mine is more like Greg’s, Todd’s more like Tiffany. Greg would write stuff down on Post-it notes that he wanted to remember to talk about, and we’d talk for hours, solving all the world’s problems from one of our living rooms. Our opinions of things turned into recommendations to each other, which turned into us having the same chair, coffee maker, Vitamix, and television in our homes. We all blame each other. We started babysitting their Chihuahuas when they went on vacation. Their family became our family. 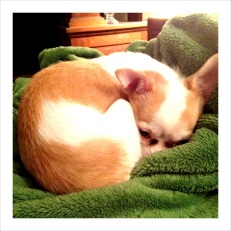 They drove 30 minutes just to visit me after I had my wisdom teeth out on this day. They brought lots of movies.

Our BFFs have BIG hearts. They lead the biker ministry at our church and just have a vision to see people freed up to live life. They vacation in Mexico nearly every year, and each time, they pack a suitcase full of items to donate to a local church there in Zihuatanejo. One year they even disassembled a special kind of wheelchair and packed that sucker up to take with them in order to deliver it to a child in need of it. We were in love with their determination. That wheelchair made it there, of course.

Greg carries these tiny tin crosses in his pocket. I don’t even know where he gets them. But he leaves them everywhere he goes, gives them away. Whenever they’ve been at our house, I’ll find a few over the course of the next few weeks. Under the soap dispenser. In the flower pot. Behind a picture frame. Just a little reminder that we’re loved by God and by Our People.

Tiffany has this uncanny ability to see both sides of things. When talking about a situation, she can throw in a good well another thing that could be is… or have you ever thought maybe… and helps me see things in another light. She helps me hash out the stuff I’m thinking about, then we high-five for being so awesome together. 🙂

And as we all know, life has a way of testing us and Our People. Things happen along the way. Road blocks pop up and detours can’t be helped. This is when you find out who is planning to stick around. Who is really Your People.

We’ve been through it all together. It’s been about a decade now. None of us seem to be going anywhere. When Greg had brain surgery, (Who actually has brain surgery?) I sat at the hospital and emailed their whole family regular updates so Tiff didn’t have to worry about it. When our son was in the height of his addiction, they prayed us all through it and helped him through recovery. When my momma died, they were right there. When our world started crumbling, Greg was the only person we would even let in our front door.

Someday when we’re much older, and we can’t even tell what all of Greg’s expertly-done tattoos are anymore, I imagine we’ll sit around and talk about how life turned out. Todd will have a Stella in hand, I’ll be sipping a half-sweet tea. Tiff will be cupping her coffee with two hands and Greg will drink water to somehow balance out eating his Doritos. We’ll talk about what the grandbabies are doing while we pet their fur-babies. Maybe Todd will have even grown to love their pet snakes. (Don’t anybody hold your breath on that one.)

We will have seen each other through a few more surgeries, most likely. We’ll talk about how awesome our 60th birthday parties were (except they’ll still be planning mine because I’m way younger than all those jokers!) We’ll be talking about where to go in a couple summers to celebrate my retirement. 30 years of teaching is long enough.

But we’ll be there. Together. Watching somewhat disturbing shows and having long conversations. We’ll say stuff like: Man, life is good and God really came through, didn’t He? The dudes will wander out onto the back porch and get their own conversation going. That’s when Tiff and I will look at them, then look at each other. We’ll let out a big sigh, and say, for the millionth time…