There’s this neat phenomenon I’ve heard about. From what people say I guess it occurs rather frequently, given the right circumstances. But I still have a hard time believing it, because in my world it’s about as rare as a unicorn.

But y’all, folks say that sometimes, really truly: Your People are actually related to you.

I know, right? Seems pretty far-fetched to me. Not to be telling tales out of school or anything, but for me, most of My People–the ones with whom I share everyday life and most of my memories– share no blood with me whatsoever. It’s just how it is for me.

I have a few exceptions to this, and one of them is my sister Kara. We share blood for sure, along with the exact same eyes, laugh lines, sense of humor, and thighs (thanks, a lot, mom.) 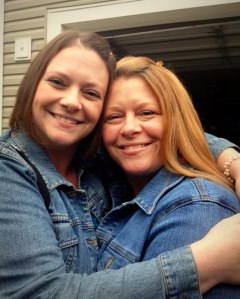 Wonder why people ask us if we’re twins?

Kara got the good hair in the family. I mean really freakin’ good hair. She’s got this thick, wavy, every-shade-of-blonde-and-brown mane, and I’m sitting over here trying to constantly to get some volume and tame my flyaways and such. It’s so annoying.

My sister is the reason I know how to drive and get around places. We used to get in her car and drive all over the city, listening to music and stuff. For no specific reason. I think maybe that was her cheap therapy or something. For the life of me, I can’t believe she would have wanted to hang out with her kid sister all the time like that. But I loved those times. All I could think of was all the places I would go when I was able to drive myself. I was going to know all the cool places. Mostly malls. But still.

We were born 13 years apart. So basically that meant I wanted to be just like her. She was always so awesome to me. She was pretty and smart and fun had bright, awesome clothes and fun friends and tons of shoes and makeup.

Every weekend she would get ready to go out with her friends, and most of the time I was right next to her, watching her do her hair and put on her makeup. I was fascinated by how it turned out perfectly every time, even in the Blue Eyeshadow Phase. Then she would try on 1,822 outfits before finally choosing one, and head out the door, probably without giving me a second thought.

I would wait for a good half hour or so, just to be sure she wasn’t coming back, then I would sneak in and try to replicate that makeup. Using all the available options, which were from Clinique. (Whoops!)

After I made sure my 11-year old face looked totally awesome with the blue eyeshadow and all, I would dig through that pile of clothes she’d discarded while trying on the 1,822 outfits and put one together for myself. My favorite thing was her belts and scarves. You could get lost in them. She could probably have opened six locations of belt and scarf boutiques if she had kept all those.

When I had figured out the outfit I would be rockin’ for the next hour or so (until I had to leave my fantasy dreamland) I would try to do my hair. This, as you could guess, is where things started to fall apart. I mean… hot rollers? Why did they magically turn her hair into a Pantene commercial but make mine look like a cheap Shirley Temple wig you’d wear for Halloween? Must watch more closely next time.

Of course, since I was a kid and all this crap was very expensive, I would head to the bathroom and scrub the stuff off my face so she wouldn’t kill me for wasting it. (PS: Who knew Zest soap wasn’t a great facial bar/eye makeup remover?) I’d always hope my momma didn’t see me on the way down the hall and yell: Wash that shit off your face! You ain’t gonna go around lookin’ like no floozie!

Back in Kara’s room and meticulously rearrange the pile of clothes she had discarded on the bed, replacing the ones I’d been wearing. I was a clearly a genius. But this trick was nothing compared to later when I was a teenager. I would occasionally sneak an outfit out of her closet and wear it to school, then sneak it back on the hanger (EW!) when I got home so she wouldn’t know I’d borrowed it. I don’t know if she ever did catch on, but at this time I would like to take a moment to apologize for possibly causing my adult sister to wear dirty clothes out in public without her knowledge. Please forgive.

When I was 16 I got my first job in the mall working at the one-hour photo lab. Kara worked at Discover card, whose offices were located inside the Sears store at the other end of the mall, so I would frequently get to see her “at work.” It wasn’t a big deal, but it seemed super cool to me. No one else my age had a gorgeous older sister who would buy them an Orange Julius on her break time. I had a good life.

As I “grew up” (aka: thought I was actually some sort of adult) I dreamed we would continue to grow closer, but for a while that just didn’t happen. We actually grew apart. She became a Christian and got married, and we just didn’t understand each other much anymore. I didn’t agree with anything she was about during this time, and I am sure she felt the same way toward me.

It wasn’t until years later when I became a Christian myself that I understood some of the changes she had been trying to make in her life when her priorities shifted. She was there the day I took a step into faith and decided that I could no longer ignore all the signs that Jesus was just who He said He was. I can’t even imagine what was going through her mind as she watched her messed-up little sister finally get over her stubbornness for a moment and admit there was something bigger to live for. The whole day was surreal, and in most every way my journey to faith was a solitary one, but I am so glad she was there when I finally took a step.

We still don’t agree on everything, but that’s okay. We are better friends now than we ever have been. She has given me two of my favorite things in the whole wide world: my nieces, Gracie and Sara. Kara turned 50 this year, and it was so much fun to throw her a surprise party! I loved seeing everyone who came to celebrate her and how awesome she still is after 50 years! Some of her friends were there who have known me since I was that dorky teenager who worked in the mall.

Today, Kara and I don’t get to spend as much time together as I would like, but we talk or text often. She’s a busy band mom now. What?? That doesn’t even compute, but it’s adorable to me to think of her in her daughter’s team colors sweatshirt, feeding the entire band some chili or something.

I don’t tell her enough that I love her to pieces and don’t know what I would do without her. But it’s so true, especially now. Since our momma has been gone I feel like we’ve been closer than ever. Probably because she and I are so much like our mom (even some of the parts we hate to admit) so spending time together reminds us of her.

It’s one of Kara’s biggest dreams to take off and move to North Carolina, but I just don’t think I can allow that. I don’t think I could deal with not knowing that we would be running to Target together or meeting up for lunch at least a few times a month. No, that just isn’t gonna work for me. I need My People, and that includes my sister. Especially my sister. She’s my unicorn.

Folks, Your People are so very important. If Your People share your blood, consider yourself very lucky, because that’s not always the case. And if you have a fantastic big sister, tell her how awesome she is, even if she did get the good hair in the family.

Don’t forget! You as a #write31days reader can enter to win a $500 shopping spree from Dayspring!  Just click this link to enter the drawing. Easy Peasy!