Did you ever meet someone and just instantly know they were something special? There’s just something about them, isn’t there? They have a captivating tone to their voice. They have a sparkle about them in some way. They are generous and kind and you just want to be around them and hear everything they have to say.

Jean is one of those people. I’ve been trying to think of the perfect way to describe her and I think I’ve come up with the right word: Darling.

She is simply darling. You just love everything about her when you see her. Her big ol’ smile, her twinkly eyes. Her adorable outfits. And that’s before she ever says a word.

Jean is a CATCH Court mentor and has been since 2013. This was right around the time that I’d started learning about human trafficking and its prevalence in my beloved city. I had joined the fight, and started a small line of handmade jewelry called Fancy Freedom Designs. I sold my jewelry and donated a portion back to an organization called Freedom a la Cart (Doma at the time), which supports the women of CATCH.

At this point in time, Jean and I hadn’t even crossed paths yet.

Then one day at CATCH Court, someone was wearing one of my necklaces. She complimented its owner, who told her about Fancy Freedom. And that, as she puts it, was the beginning of a long love affair!

She’s not kidding! Jean is easily my #1 customer. She’s ordered more things from me, from in-stock items to custom gifts, than anyone else since I started. She tells everyone about Fancy Freedom Designs. I think she sits at home all hours of the day and just emails and texts and calls people all day long to tell them about my jewelry. (Except on Thursdays when she’s at CATCH, obviously.) But seriously, I’ve had a lot of people say they found out about me through Jean. At some point I may have to compensate her for basically being my entire marketing department. She’s been such a wonderful cheerleader, and I couldn’t be more thankful to have such a kindhearted, caring person in my corner. I just love her to pieces.

So imagine how excited I was when she asked me if I’d be interested in coming with her to a nearby city to do an artistic afternoon with the women of Safe Harbor House, a residential program for women who are coming out of traumatic experiences such as sex trafficking and domestic violence, among other things. They offer a holistic approach to healing, and as part of that, host regular workshops and such to give the women creative outlets to express themselves and learn new skills.

Spend an afternoon with Jean? And teach some amazingly strong women a new creative expression? And enable them to create one-of-a-kind, beautiful things that inspire them to keep going in their journeys? Yes please!

We set out on our road trip, and little did I know, some of the best parts of the day were about to happen in the car, while I was listening to Jean’s story.

That day on the highway, I listened intently and learned that Jean is every bit as tough as she is darling.

She told me that day (and has since emailed me details again to refresh my memory) about some medical issues she’d experienced.

And by “some medical issues” I mean life-threatening situations she’s been in. More than once.

Jean has PKD (polycystic kidney disease) and she found out when she was 23 and was trying to become a donor for her own father. She went on for years with no symptoms, but eventually had to go on dialysis.

In 2001, she married an incredible (and cute!) man named Bob. They make a fantastic couple, and he is as big-hearted as she is. The following year she was blessed to receive a kidney from her friend Laurie, volunteering to be a living donor. Jean had both of her diseased kidneys removed, and the transplant went great for both ladies. All seemed well. Shortly after, she suddenly crashed and the medical staff had to work to stabilize her. By the time this happened, the blood in the new kidney had clotted. Her team tried over the next several days to get that new kidney (affectionately nicknamed “Laurean”) for Laurie+Jean!) working correctly, but within a week it had to be removed. Back to square one and the dialysis.

I cannot even imagine how painful this must have been, both physically and emotionally. Not only did Jean have to go through all this herself, but she was a newlywed and her beloved Bob was enduring it alongside her.

For months she actually had no kidneys. And you’d think that would just be the end of this story. But Jean sure knows how to pick some good peeps. Later that year, another friend offered to be a living donor! This time it was Donna, (donating her kidney, “Dean,” of course, for Donna +Jean) and all things went well with this transplant. (YAY!) Jean says that she proudly carts around the workhorse, “Dean” and I know she couldn’t be more thankful.

Perhaps it is all this struggle that makes Jean the delightful lady she is. She simply says there are many people who have had it worse than she has, and she considers herself and Bob to be some of the most blessed people she knows.

I would agree. I mean, she and Bob have each other as Their People. And Jean’s People are everywhere. We share some mutual People through our anti-trafficking efforts. But when I asked Jean to tell me a little about Her People, she had no hesitation.

Obviously her Bob is incredible. He’s her rock. Standing beside her through all of that difficult time during the kidney transplants. He’s her best friend and the love of her life. She also mentioned a childhood friend, Jenny, who goes as far back as when they were kids and they were sneaking out of their windows after bedtime. Her friend Laurie, who gave her a kidney and cried with her when things went South, now lives in AZ, but they are as close as ever. Jean says they “specialize in capers,” a phrase which really only makes me love her all the more. Of course she would have enjoyed elaborating on such shenanigans, but that would put my life in danger. So… there’s that.

Even if I had never taken that road trip with Jean and found out all the additional awesomeness about her, I would still absolutely already know that she was My People. We share a love of freedom and reaching out to others to help them understand that they are valuable and loved and created with purpose. And that right there is enough. Everything else is just a bonus. 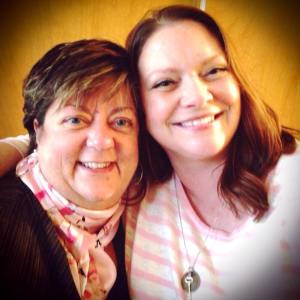 Jean is the kind of People we all need more of in our lives. She’s sweet and kind and giving and tender-hearted and tough all at once. And all that rolled into one beautiful person sure is inspiring.

Who is the Jean in your life? Is there someone who you already knew was awesome but then just blew you away with the rest of their story? Leave a comment to tell us about him or her.